I Have Ray Tracing!

I spent this past week figuring out how to set up a framework using Three.js for rendering. More specifically I looked at the following:
Along the way, I realized that there is very little documentation on Three.js. The API is a work in progress, and Google searches return nothing more than a handful of basic tutorials.

After a few hours of poking around, I finally found the places that I can use for reference. They are not as great as APIs but they will work:
In addition to those sources, I looked at two specific related WebGL implementations to see how the framework is setup:
Relying mainly on the two existing implementations, I designed and implemented my framework. The rendered image will be displayed as a texture on a quad; thus, there isn't much on the WebGL side at all. As far as WebGL knows, there is only a one simple geometry in the scene. This is implemented as a quad facing in the positive z direction to a static camera.

The quad acts like a screen, and the custom shader on this quad is where all the rendering happens. The shader will look at some the actual scene to be rendered, performs the necessary computations, and outputs an final image onto the quad.

At the moment, I implemented a camera from Three.js that is controlled by the mouse, and I used the base code from the ray tracing example in my shader to set up ray tracing and a simple dummy scene. The result is successful. I have real-time ray tracing and an interactive camera. The results can be viewed here: http://iamnop.co.cc/webgl, and here is a screenshot (since I realized that I am constantly changing the code on the page.) 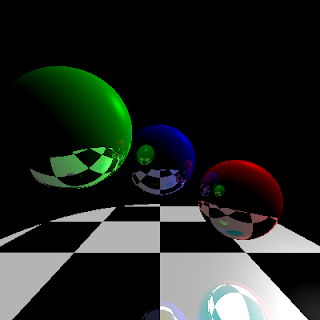 Once I have a proper scene graph set up, I can finally start working on rendering with global illumination. I will mainly rely on one of Hendrik Jensen's sources that I have. They are thorough and include all necessary implementation details and mathematical formulas.

Posted by Nop Jiarathanakul at 12:04 AM