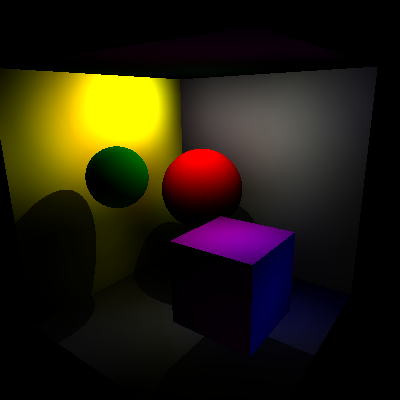 The performance took a huge hit. It now takes about 4 times as long to compile, and my laptop is about to burst into flames as it's running. Getting about 9 FPS. So the scene is a bit dark because I'm only using 50 photons.

One other minor improvement I did was to also add specular highlight as an extra step after photon gathering (similar to what I did with shadow). This shows up as the white hotspot on the glass sphere.

Results looks nice though. Here it is! 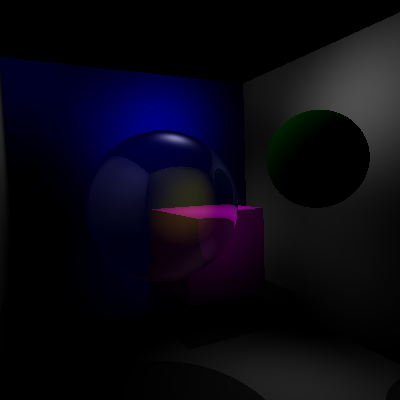 Posted by Nop Jiarathanakul at 12:20 AM No comments: 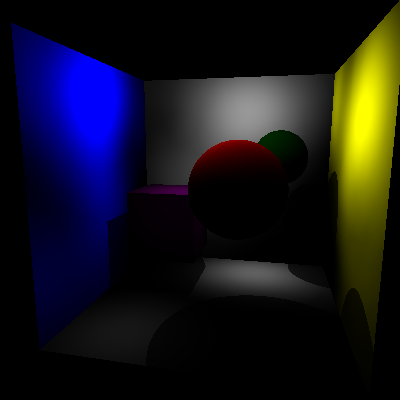 Posted by Nop Jiarathanakul at 6:02 PM No comments: 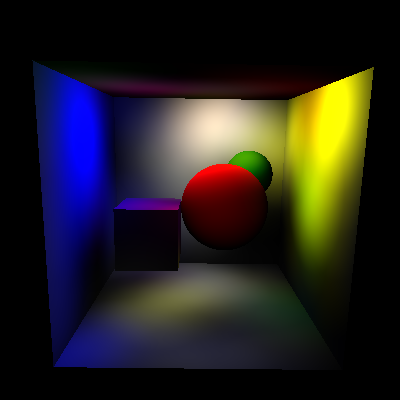 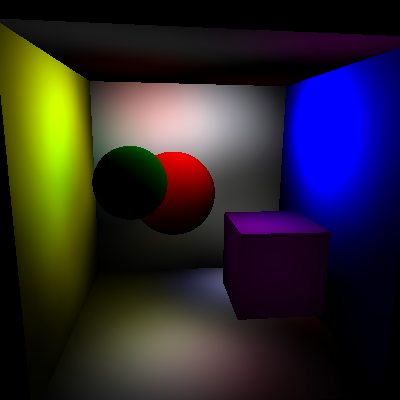 Posted by Nop Jiarathanakul at 5:45 PM No comments:

Continuing the work from the previous post. I completed the rendering side of per geometry caching. Unfortunately, I wasn't able to come up with a better way than one mentioned in the last post, with brute-force if statements per geometry. As a result, there wasn't any speed increase that was expected. Hopefully I can find a better way to do this and increase performance that we were supposed to get.

The results look better as expected, with no unintentional color bleeding from surface to surface. Here is a screenshot of it. 100 photons, no bounces (which means there should be no diffuse color bleeding anywhere.) 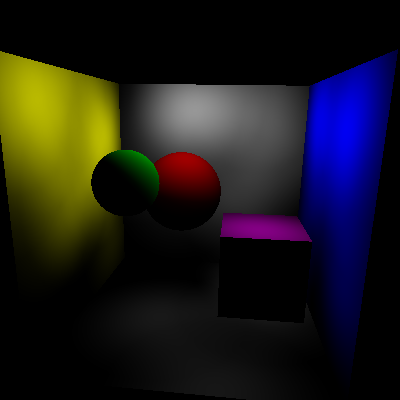 Posted by Nop Jiarathanakul at 5:15 PM No comments: 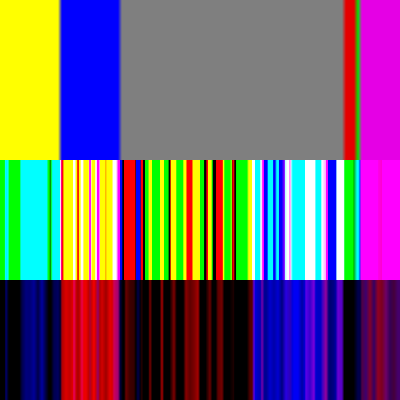 I'm not sure if there's a smarter way to do this. This would be quite a few IF statements, one per geometry, and it would not scale well. And if the hardware would visit every inner IF statements anyway (something I'd have to figure out), then this would not improve performance at all (plus it would make it worse because of all the conditionals.)
Posted by Nop Jiarathanakul at 10:08 PM No comments:

Got refraction working at real time. Doesn't look quite realistic without surface reflections though...

Also, apparently, this runs on Chrome now. No idea why it works. 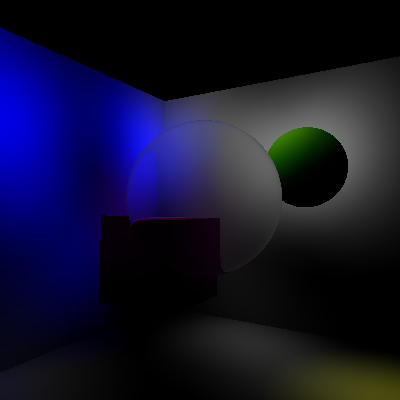 Posted by Nop Jiarathanakul at 1:23 AM No comments:

Since the week was the last week of school, I wasn't able to do that much, but the one thing I accomplished was to implement Gaussian filtering

Gaussian filtering is used for photon gathering. Needed to tweak a few operations and constants here and there before I could get the image to look nice. Definitely much smoother than the cone filtering that I had before. 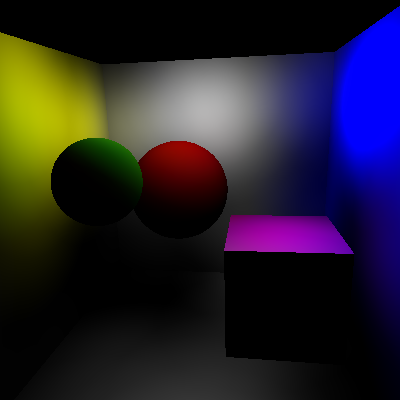 Posted by Nop Jiarathanakul at 12:51 AM No comments:

Today I had my Beta Review with Joe and Norm, and I'd say it went pretty well. Norm was generally satisfied with the results, mainly because I am able to produce a decent image at real-time with relatively very few photons, despite that various corners that has been cut and many "cheats" that I did on my side of things.

There were a few good points that came out of the conversation:
With the conversation I had this morning, and this list of features, I feel that I am in a pretty good shape to move forward and finish up a few things that I have left. Here is a list of tasks for me from now to the end of the semester

Must:
Optional:
With the above list of tasks, I have organized them into the remaining timeline as follow:

Posted by Nop Jiarathanakul at 9:11 PM No comments:

We're at the point of Beta Review, and it's time to do a self evaluation of how the project has been coming along.

Looking back at what I set as the original goals, they were quite reasonable. After all, my project is only to implement global illumination with photon mapping - pretty standard stuff. However, there are still many features that I had left out and not implemented. Why? I think that the one aspect of this project that is particularly lacking was the initial research and planning of the framework I will be using. Most of the time spent on the project was not on the global illumination algorithm, but debugging and compromising for the nature of the framework. More specifically, there were many limitations of GLSL ES that I did not foresee that made many standard features of a scene graph or photon mapping very tricky and difficult to implement. With more thorough research and thinking, and planning through every step of the project, I believe the project would have gone much more smoothly. Nonetheless, I managed to make certain compromises and find various alternative methods along the way that allowed me to build some kind of global illumination renderer on WebGL.

The following is a list of features I have today:
And here are features that were compromised:
Finally, here is a list of future tasks that might or might not be implemented:
So, in a way I have met my main goals, but along the way I had to cut many corners. Looking ahead to the next few weeks, I see myself working on those features that weren't properly implemented or not implemented well, and trying to see if it is possible to make them fully functional and more optimized. I also plan to add more interactive functionality by allowing users to modify the scene. Finally, I am afraid to say that I won't be getting around to my future tasks, specifically irradiance caching and caustics, both of which are not well supported by my current framework.

After the Beta Review tomorrow, I will post more details about the future timeline of the next few weeks.
Posted by Nop Jiarathanakul at 12:03 AM No comments:

Improvements:
With all photon values as textures, we can now do a random look up and are no longer limited by the limitations of arrays. The following result is using 200 initial photons (no bounces, just to the diffuse surface) and it's not looking too bad! 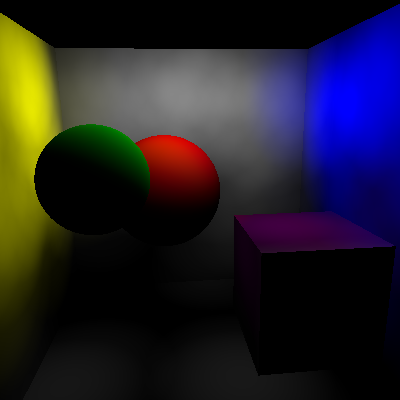 And here's an experiment on mirrored surface. 100 photons only (performance dies at 200). 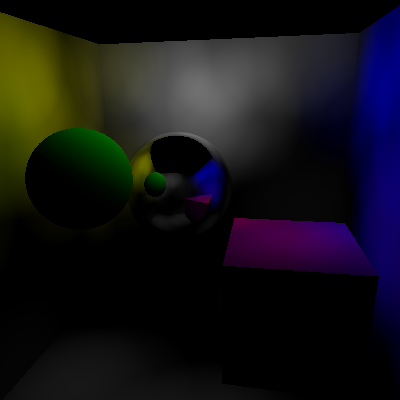