Here are the final deliverables for the CIS 565 final project.

Posted by Nop Jiarathanakul at 3:18 AM No comments: 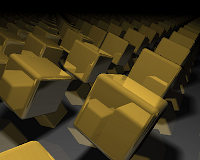 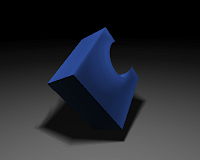 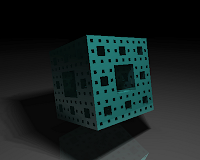 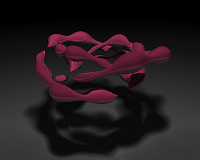 Posted by Nop Jiarathanakul at 2:02 AM No comments:

Decided to throw in another fun experimental feature.

The Displaced Bumps option displaces the distance function according to an arbitrary function (in this case a simple sin wave). It doesn't work very well with square shapes. However, it works great with round box, and it creates a very interesting shape with the knot. 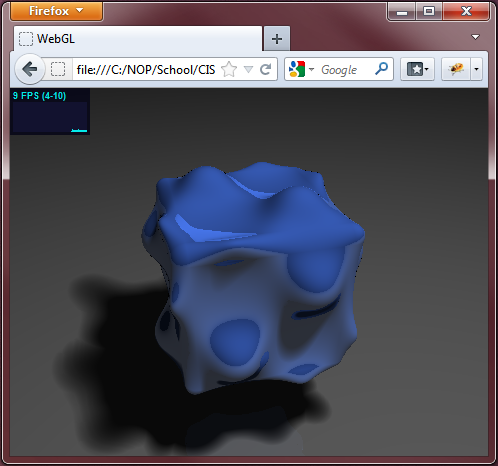 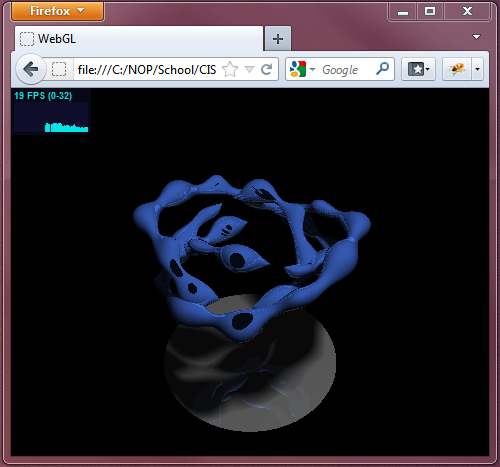 Posted by Nop Jiarathanakul at 4:37 AM No comments:

Worked straight 10 hours today. I think I have reached a point where I am satisfied with the code.

A huge improvement is a user interface for selecting options. To bring up the GUI, press "Shift+Q". The code is live at www.seas.upenn.edu/~pjia/raymarch (since unfortunately iamnop.com is still having issues.) If you are running this, remember to resize your browser to a smaller size for reasonable performance. 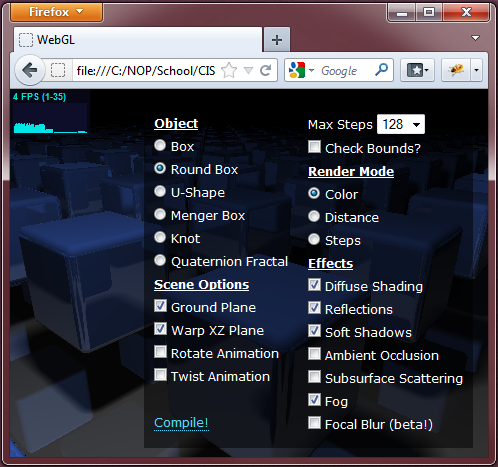 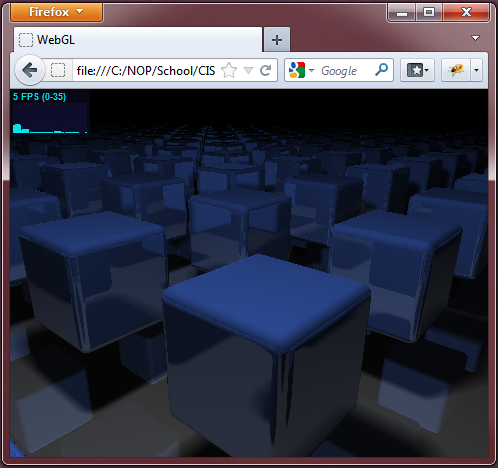 Aside from fixing corner cases and doing optimizations, here are the new features implemented:
And of course, the project is not complete, and there are a few known bugs:
Posted by Nop Jiarathanakul at 3:56 AM No comments: 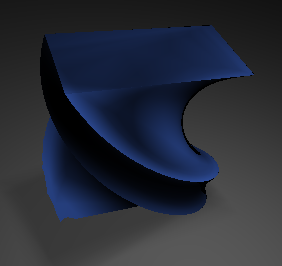 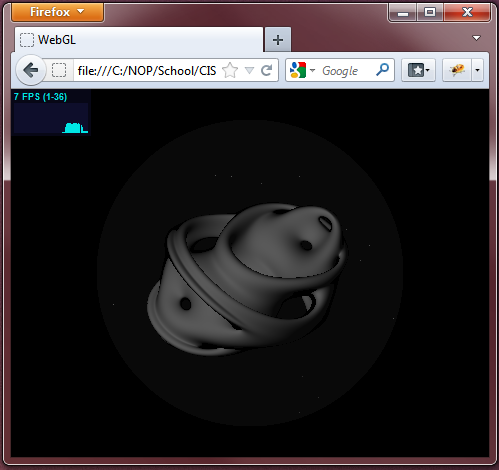 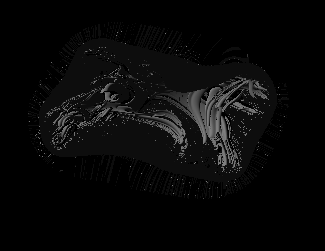 I feel that going in this direction is much more relevant to this class than trying to construct fractals. Going forward, instead of trying to generate my own fractals, I would port existing fractal code from various resources as test target renders.
Posted by Nop Jiarathanakul at 12:31 AM No comments:

Worked on the code a bunch today. I'll quickly run through some of the issues.

Implemented the recursive tetrahedral outlined here. However, it is represented in points, and is not appropriate for this framework. So I decided to remove it. Below's a render of the fractal using the number of steps. 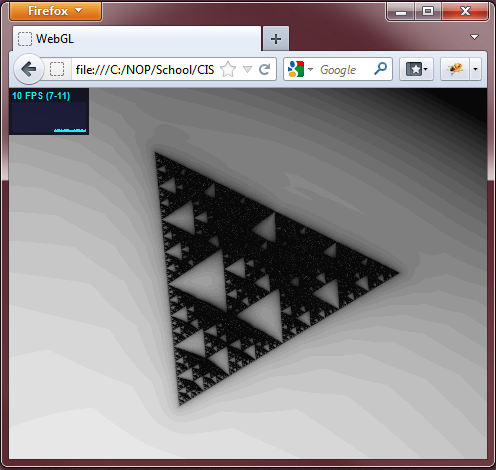 Next was to reverse my last change for the branch optimization that I blogged about. I just did a few tests and realized that when I flip the camera such that it is under the ground plane and it would only render black, I noticed a FPS increase of 2-3. This is because of screen space coherence and warp termination. There is branch diversion during whether it would render or not, and when enough pixels do not need to render, there is a performance increase.

Next I ported a knot shape code from the.savage's renderer from his renderer in GLSL Sandbox. Performance took a huge hit. Result below: Then I realized that his renderer does something quite smart. He uses a circular bounding volume, and his renderer only renders what is inside the volume. It works for him since he only renders single floating objects in the middle of the screen. I implemented this into my own pipeline. It was a huge performance boost, over double the FPS. And if I zoom out such that the bounding volume occupies a even smaller portion of the screen, I see significant performance increase, from ~18 FPS to up to 90 FPS, again, due to coherency and warp termination. However, this technique is not too suitable for the types of images I'm trying to render since it crops only the center area of the scene. Here's a result: 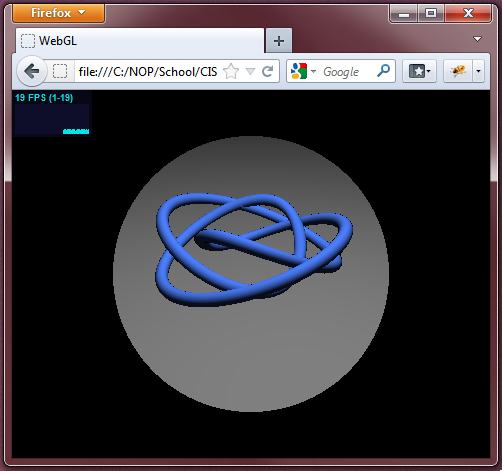 I'll have to think about whether to use this technique, since it does provide a very significant performance boost.

Next, I discovered that my renderer has a huge issue in that for certain shapes when viewed from certain angles, there are banding / rippling distortion errors. I spent a long time looking at it but still cannot find the answer. I might have to go ahead without solving this issue since time is running out and I'd rather focus on other things. Here's an example:

Posted by Nop Jiarathanakul at 12:14 AM No comments:

Implemented Inigo Quilez's menger sponge, by following his tutorial. This is to test if the framework can handle scenes that are getting more complex. The frame rate is still acceptable, on my puny laptop graphics card. 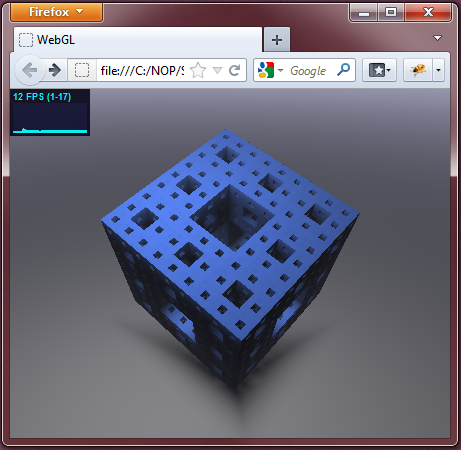 I also implemented a micro optimization that came to my mind. Before I had:

Instead, I use built-in functions to eliminate the branching altogether.

I'm not sure if this helps performance, might be by a difference of 1 fps at the moment.
Posted by Nop Jiarathanakul at 1:56 AM 2 comments:

Found a great resource on rendering fractals, written by Mikael Hvidtfeldt Christensen, who is a physicist and a software developer (and apparently an expert on fractals rendering.)

He wrote a 7-part (so far) article on rendering fractals. His series is almost a one-stop resource for all things related to rendering fractals, covering topics from coloring and lighting, to complex math associated with generating different types of fractals, such as Julia sets and Mandelbulbs.

Most of the rendering part I have already figured out from various other sources, but it is a great read nonetheless, and has given me a few more ideas on various rendering passes. The part that is most useful is the part on modeling and generating fractals. This opened up a whole new area that I am completely new to. There is a tremendous amount of math involved, and it is a rather difficult read. A lot of the math I do not understand, and I am still working on the reading and figuring it out.

I only wished I had found this blog earlier!

Here are some amazing images from stuff he's working on. This guy's a true expert!
http://www.flickr.com/photos/syntopia/
Posted by Nop Jiarathanakul at 7:20 PM 1 comment:

Quite satisfied with the rendering results. Go to http://iamnop.com/raymarch/ for some nice real-time live code! (Hint: it's animated!) 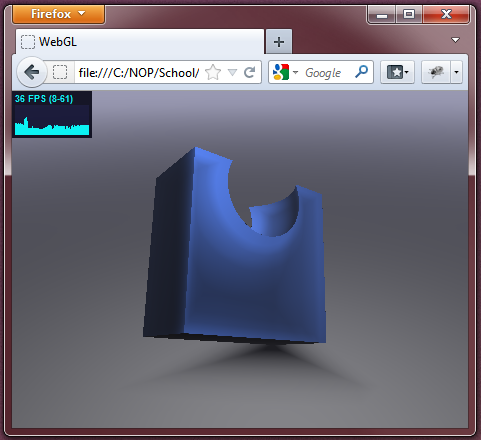 Posted by Nop Jiarathanakul at 3:56 AM 4 comments:

From observation, when viewport is mostly sky (far distances), the frame rate is about 30 fps. When the viewport is mostly ground or geometry (close distances), the frame rate jumps to about 50 fps. This is good news, since it implies that the ray marching loop is correctly optimized, where it successfully terminates when an intersection is found. I was not able to observe this difference until now.
Posted by Nop Jiarathanakul at 3:38 AM 2 comments:

I have tweaked and fixed up various shading passes, and I think I am ready to move onto the modeling part of the project.

Here are the components of the shading: 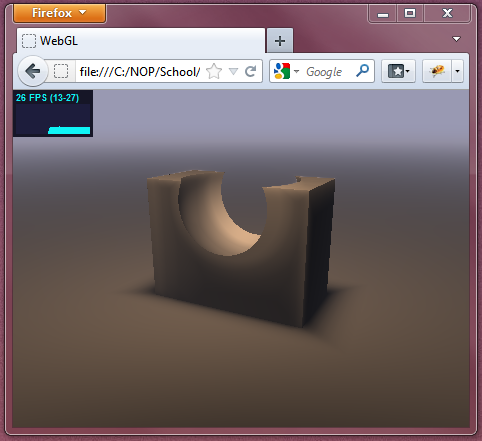 Posted by Nop Jiarathanakul at 2:34 AM No comments:

Implemented subsurface scattering based on sample code from Mazapan. The code again is similar to the technique for ambient occlusion. It samples distances along the marching ray. However, since it relies on negative sampled distance, it only works on signed distance fields (for example, it doesn't work with udBox). 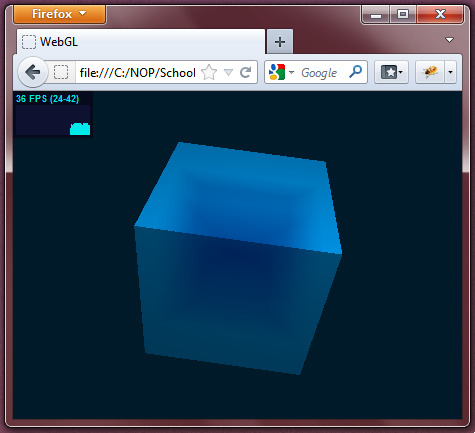 Here are some results of just the soft shadows component. I personally think they look very nice, and I am questioning the need for the diffuse lighting component at all. 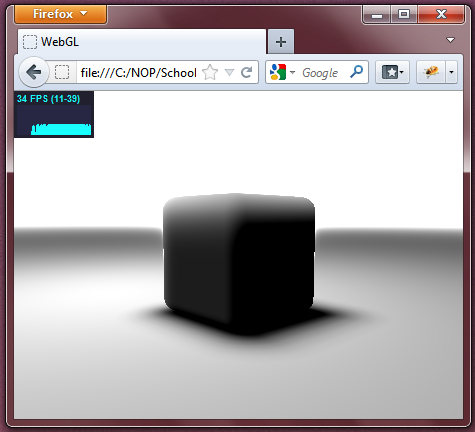 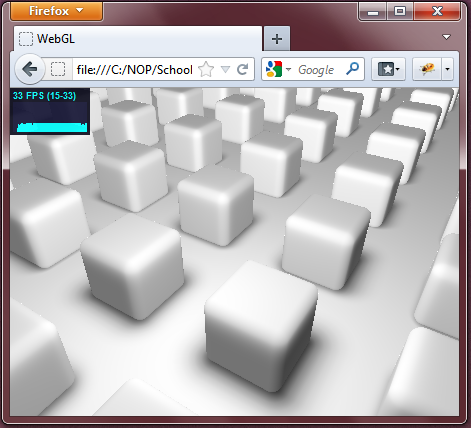 Posted by Nop Jiarathanakul at 10:46 PM No comments:

Implemented ambient occlusion, based on method proposed by Iñigo Quilez. The method is originally based on another paper, "Fast Approximations for Global Illumination on Dynamic Scenes."

Here's how the method works: the ambient occlusion coefficient at each surface point is computed by taking samples of the distance field at varying distances above the point long its normal. This essentially estimates the "openness" of the region above the point. Here is a more formal mathematical description:

Here is an output of just the ambient occlusion term. 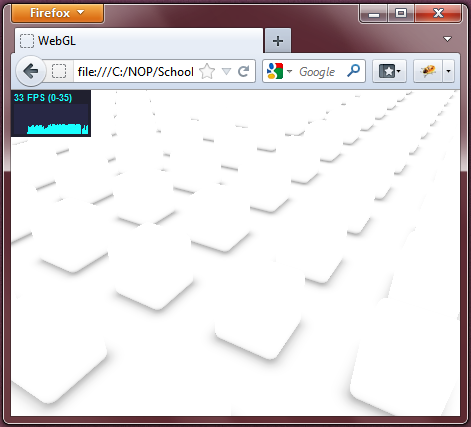 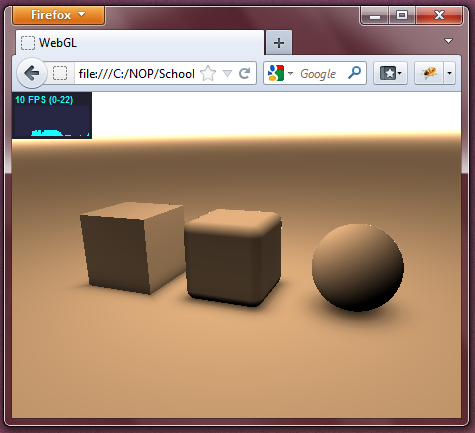 Also, I want to point out that, with ambient occlusion implemented, there is an unintentional "skyline" effect where the ground plane ends. This could be because the ray does not intersect anything and therefore the normal is undefined at those points. However, it does provide a nice gradient visual effect, where before there were curved bands going across as a result of numerical errors. Here's a better picture of the "skyline". 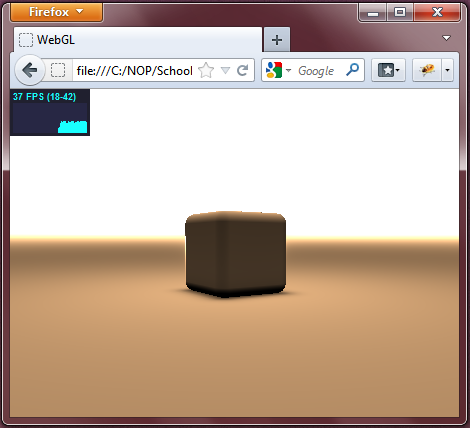 See the slide deck for the midpoint presentation here.
Posted by Nop Jiarathanakul at 9:28 PM No comments: